I suppose my love for bread comes from being Goan, and having experienced the joys of beautifully baked bread whenever we visited Goa during our yearly summer vacations. From the basic Pao and Poee (Poi) to the Bakri and the ring shaped Kanconn, to the numerous varieties that the village ‘poder’ or baker delivered to our doorstep morning and noon, just in time for breakfast and tea. Every one of those loaves of bread so distinct, so full of flavour, and still warm, they dance around the edges of my tongue and my mind as I relive those memories… So many varieties, I can’t recall all their names.

Even back home, Bandra where I grew up was dotted with numerous Irani and the odd Goan bakery or two that made both the soft pao and its crustier cousin the brun pao. None of those packed loaves of the flavourless sliced variety, sitting encased in plastic bags, waiting, characterless and forlorn for someone to pick them up from the corner store made it to our table, at least not very often.

I’ve always wanted to bake delicious bread… forming it into loaves, shaping it… my love for clay and working with it made me figure that it wouldn’t be such a difficult task. And despite being a fine art, the process is really quite simple, with the easiest of ingredients… flour, water, salt and yeast… in some cases without the yeast. All it takes is love and a pair of caring hands.

And then comes what’s known as artisan bread… which is really nothing but small batches of focaccia, ciabatta, country loaves, sour-dough and baguettes among others, all hand-crafted and at times combined with an array of scrumptious ingredients, ranging from cheese (Parmesan, Cheddar or Mozarella to name a few) to sun-dried tomatoes, caramelised onions, or even the finest olives… the list is endless.

Traditionally artisan bread is made in old-fashioned masonry ovens, but even a tiny regular home oven can produce the most amazing loaves of bread, and it isn’t all that difficult to make.

Here’s a Cheesy Herbed Focaccia with Sun-Dried Tomatoes. I had the sun-dried tomatoes sitting in rosemary and garlic  infused olive oil for a week, just to develop a few more flavours and I used both the olive oil and the tomatoes for this recipe along with a generous handful of Parmesan and some parsley while working the dough.

… I  knocked it back (in a quick punching motion) and worked it a bit before placing it onto the baking tray to sit for an additional twenty to twenty-five minutes (I lined the tray with a bit of oil).

Knocked back... but not out! 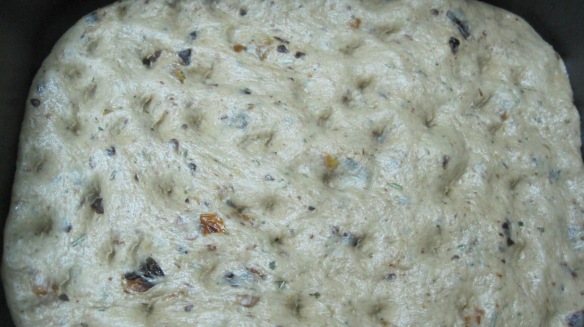 Brushing the top with olive oil, a generous sprinkling of oregano, chopped rosemary and a bit of rock salt… and it was oven ready… 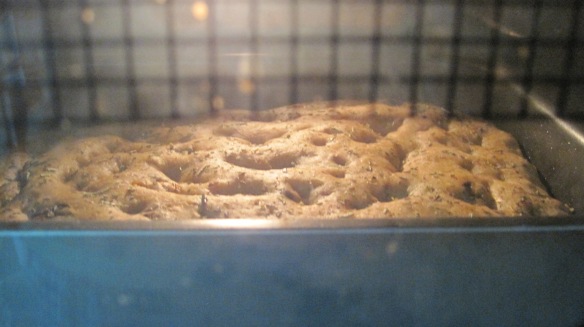 Snug as a bug!

And here it is…

I wanted to eat it no sooner it was out of the oven, but I turned it onto a rack to cool before slicing it… and wow!

Promote your Page too